Hello ,my buck list friends ! There has been a lot of crazy stuff going on with our refrigerator it started out as inconvenient then it got frustrating  now it is just funny but I’m getting ahead of myself . Now, Let’s start at the beginning.

The Great refrigerator saga of 2018

Towards the beginning of August our freezer stopped working ,I went to get a Creamsicle and it was very soft I thought that the door had just been left open . After mentioning the Creamsicle incident to my dad it was discovered that the freezer had stopped working but our Refrigerator/ freezer was under warranty . We called the warranty company and an apportionment was made to have a repair person come out .  Before the repair person could come the refrigerator stopped working as well . When the repair person did come he said he didn’t know how to work on this kind of system so the warranty company had to find someone who could work on the system and it took them a long time to find someone .When they finally did  find someone the repairman came out and said a new part had to be ordered . The part came then the repairman came but it turns out the wrong part had been ordered . In the meantime we didn’t have a fridge so we had to eat out all the time and store everything else in ice chests . We had to buy ice almost everyday, the bills were really adding up . Finally we bought a mini fridge since it became very clear that this problem would not be solved for awhile . The mini fridge was over $100.00 but it works well . We can’t store as much food as we normally would but we don’t have to eat out near as much as we were . Anyways after the wrong part was derived the warranty company decided to give us refund so we could get a new refrigerator . We went to Home Depot and picked out a new fridge and it was scheduled to be delivered this Tuesday but they didn’t bring enough workers to move the refrigerator up to our house . Then yesterday they came again but the refrigerator was damaged . It was making me mad but now it is just so funny .  Maybe by Christmas we will get a new refrigerator I’ll let you know ! 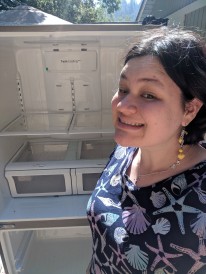 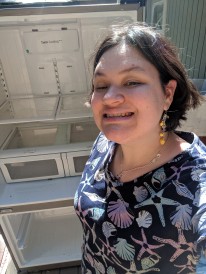